The Gorge Zipline Canopy Tour in Saluda is Steepest, Fastest in U.S. 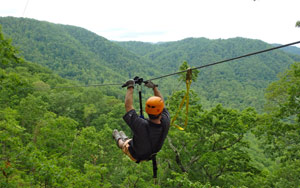 [Saluda, NC] Green River Adventures, a tourism-based guide service, launched The Gorge, the steepest, fastest canopy tour in the country.  Reserve your Zip Line Canopy Tour. The Gorge, which opened in June 2013, features 11 zip lines, a sky-bridge, and 3 rappels in tree-based platforms. Participants will experience a 3-hour tour immersed in nature beginning at the outpost and finishing an unprecedented 1,100 vertical feet at the base of the gorge. Most of the tree-based platforms will have stunning views of the gorge.

“Our out post is perched on the rim of the Green River Gorge. You’re facing a 1,200-foot wall of the gorge so there’s a really dramatic effect-like you’re going to dive into the gorge,” says Tim Bell, co-owner of Green River Adventures and The Gorge. “We’ve got views up the Green River Gorge where you look up into the narrows section, but you can also see out the barrel of the gorge over Lake Lure and all the way up into Linville Gorge and Lake James, and, actually, on a really, really clear day you can pick out Grandfather Mountain.”

The canopy tours complement the adventures already offered by Green River Adventures, which include guided inflatable kayak trips, whitewater kayak instruction, and waterfall adventures. Currently, GRA (Green River Adventures) operates from April through October. The Gorge will have an annual operating season of March through November.

“We hope that the addition of The Gorge will extend the tourism season for Saluda and encourage visitors to stay for multiple days in the area, which will benefit the local store owners, accommodations providers, and restaurants,” says co-owner Sara Bell.

The Gorge gift certificates and scheduled tours are available now for purchase at thegorgezipline.com.